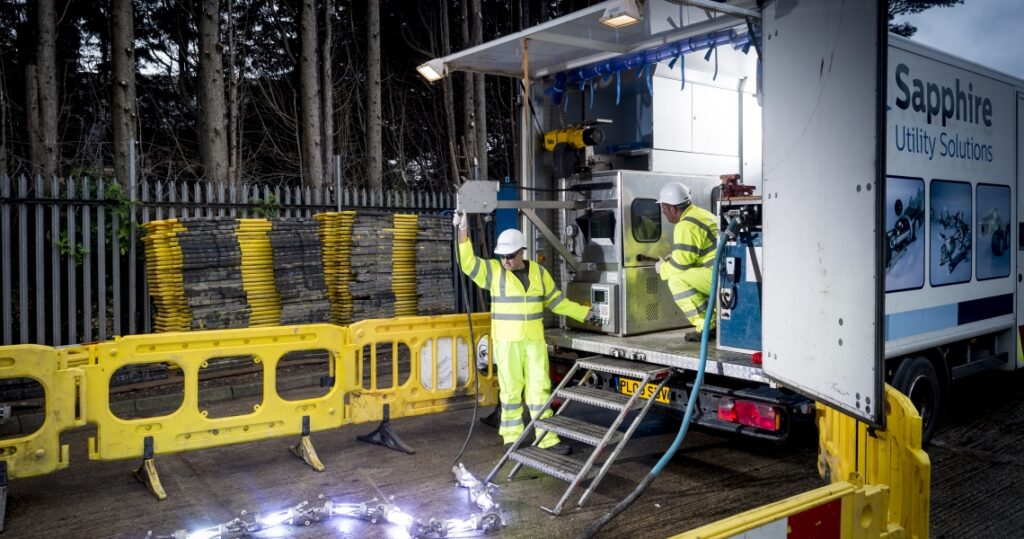 M6 smart motorway project completed in half the time

Drainage re-lined in half the normal time

In a project designed to alleviate traffic congestion on the M6, Sapphire Utility Solutions has dramatically reduced the time required to rehabilitate drainage pipes by employing a method that was originally developed for the wastewater sector. The technique, which re-lines pipes using an ultra-violet light curing method, is twice as fast as the traditional hot water/steam curing method and the finished product is more than five times stronger than traditional techniques.

Technical and Innovation Manager Stuart Ashton says: “Cure in place methods are much faster than dig and replace, and the UV curing method offers further considerable advantages over those that involve water. The speed with which we are able to fit an extremely robust and reliable lining is obviously a major advantage. However, there are  huge environmental benefits because the new method does not produce contaminated curing water and does not involve large fossil fuel burning boilers and plant.

“In the past, this water would have contained organic chemicals from the process, and as such would have had to be removed. In contrast, the UV method is much simpler and does not produce any environmental contamination.”

Sapphire Utility Solutions is working as a sub-contractor for a Carillion Kier Joint Venture which is one of three delivery partners for the Highways England Smart Motorway Programme that includes a range of smart motorway technologies including the testing of All Lane Running and Advanced Directional Signage. Sapphire’s work on the M6, between junction 16 near Crewe and junction 19 near Knutsford, began in February 2017 and Stuart estimates that it will be completed as early as October 2017.

All Lane Running will operate for 30km between J16 and J19, which has meant that the hard shoulder will become a permanent running lane. As a result, there will be four running lanes in each direction and the former hard shoulder will be subjected to much higher levels of heavy traffic, so the underlying drains are being fitted with a fibreglass lining that is both rigid and extremely strong.

The alternative to re-lining would have been pipeline replacement, but Stuart says: “If ‘dig and replace’ had been chosen, the project would have taken an extra year; delaying the benefits of All Lane Running and significantly extending traffic disruption during the project.”

The liner employed by Sapphire Utility Solutions consists of fibreglass, a polyester resin and a UV actuator. After exposing the actuator to UV light an exothermic reaction causes the resin to set hard. The liner is therefore delivered to site in lengths of up to 300 meters inside a bag that protects it from natural UV light. The liner is drawn into the pipe with the bag still in place, and the liner is inflated to fit tightly inside the original pipe. A UV light train is then pulled though the liner to initiate the curing process. The curing time is dependent upon the diameter of the pipe but a typical 300mm (12”) diameter pipe cures at a rate of 1.5 metres per minute. The lining is then fully cured, providing a rigid, durable pipe with a design life of 70 years. Once the lining is in place Sapphire employs robotic cutting techniques to open lateral connections.

The UV curing process involves a high degree of quality control and traceability. “The liner is delivered in a temperature-controlled vehicle by the manufacturer in Germany, and the batch details along with records of the pressure, temperature and the speed of the light train are all logged,” adds Stuart. “Samples are cut and tested to specification, and the client is supplied with a copy of the data.”

Looking forward, Stuart Ashton says: “Sapphire Utility Solutions has previously employed UV-cure pipe lining in the water industry, but the M6 project is the first time that we have utilised this technology in the highways sector. Considering the major advantages of this technique we believe that it will become the preferred method on future projects.”